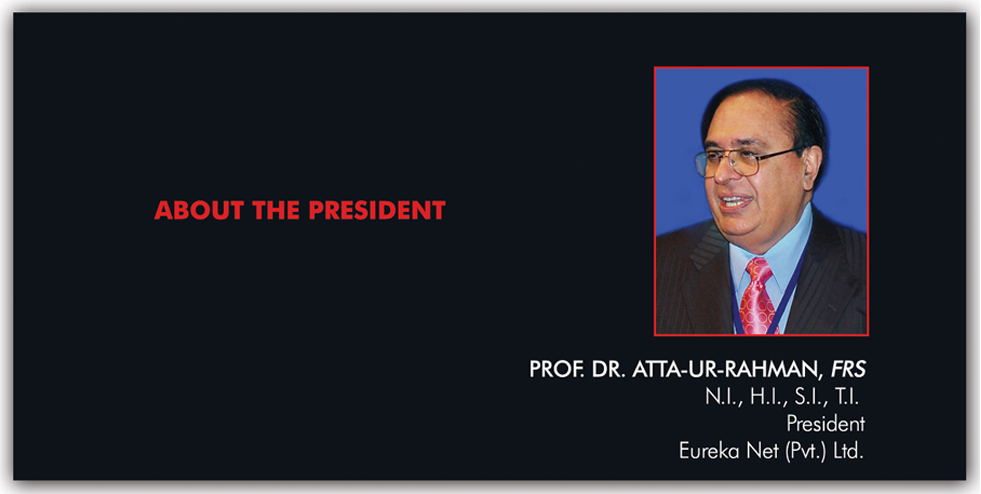 Prof. Atta-ur-Rahman, the President of our company, is the most celebrated scientist of Pakistan having being conferred four Civil Awards (Tamgha-i-Imtiaz, Sitara-i-Imtiaz, Hilal-i-Imtiaz and the highest national Civil Award Nishan-i-Imtiaz) by successive governments. As the Federal Minister of Science & Technology (including IT & Telecom) he is credited to have brought revolutionary changes in the IT and Telecom industry. He caused the explosive growth in mobile telephony by sharply reducing rates, introducing competition (Ufone), and introducing the Calling Party Pays (CPP) regime that resulted in only the calling party paying for calls on cell phones, and not the call receiving party. The internet bandwidth rates were brought down from $ 87,000 per month to $ 3000 per month during 2001-2002 and a 15 year tax holiday given to the IT industry. He also placed Pakistan’s first satellite Paksat 1 in space. Later as Federal Minister/Chairman Higher Education Commission he brought revolutionary changes in the higher education sector of Pakistan during 2002-2008. He is highly respected by all Pakistanis for his services to the nation. We believe in providing the highest quality of service to ensure complete customer satisfaction.

EurekaNet is part of a group of organizations offering a vast variety of electronic & Information Technology services to local and international clients.

EUREKA Net is a speedy Internet service seeking to provide reliable, cost effective and diverse services with stringent standards for not only small offices but also for critical business communications.